Due to Cupid’s confusions his limbs shivering,
Ever dazzlingly dressed for Vrindavan’s delight
Like two blue lotus blossoms

Brilliant As The Sun

Dear friend, the trembling of my heart can never find a cure.
No herb or medicine or balm, my beating breast can calm.
For this disease one remedy will bring relief for sure,
but that alas will soon produce painful opprobrium.

My friend I am severely struck and all my sense departs,
when Krishna’s name enters my ears and lodges in my heart.
And then there is another one whose flute enchants my mind,
seizing it with such madness that I can no peace find.
Again there is a third one, whose brilliance I see
in pictures of

Stages of purification of the heart 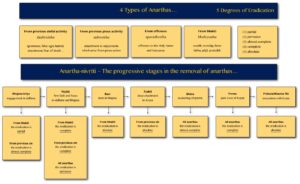 Curious to see if I was an authentic Brit I recently attempted the Life in the Uk test that the government requires aspiring new British citizens to take. To my great relief I passed it with 90%, only falling down on a question of how long was the hundred years war. I can’t see many people knowing that it was actually 116 years nor indeed how relevant to being British that knowledge is. I would think it better to test prospective citizens on their ability to talk about the weather

In the halcyon days of my youth I was a bit of a rock fan. As well as permanently damaging my ear drums, it has left me with a head full of various song lyrics hollered out to the strains of rapid fire guitar and pounding drums. One such line I recall was an old blues song covered by Cream, where Jack Bruce declaimed that, “If it wasn’t for bad luck I wouldn’t have no luck at all.”

For a while that became something of an anthem for me, as I

It isn’t always easy to see the funny side of things. Often I find it happens in retrospect. Recently I set off for a trip to that fabled land of chocolate and respected home of the European Union, Belgium. After loading up my trusty Satnav with the appropriate maps, I struck out by road. All went well until I approached my destination and it became apparent that the old satnav was struggling. It had taken me far out into the snow swept wilds of the Ardennes and as I peered

One of my favourite quotes is from the business mentor Stephen Covey, who said that the main thing is to keep the main thing the main thing. In other words, don’t lose your focus. To achieve that of course, I need to have a clear aim in life on which to focus. For many years I grappled with that, not being altogether clear what I was trying to achieve beyond survival and hopefully a bit of fun now and again. Finding myself struggling on both counts I eventually consulted

The Hunter and the Dove

Deep in the forests of India there once lived a fierce hunter. Tawny skinned, with blood red eyes, he was like death personified to all animals. With his nets, knives and traps, he stalked among the trees carrying out his terrible business. He took pleasure from killing animals, even when he did not want them for food. Seeing him to be cruel and heartless, all his friends and relatives had shunned him, and he lived alone in a small hut. He survived on wild berries, fruits, and the meat of

In its most recent survey on the subject of God, the National Centre for Social Research found that some ninety percent of us claim to be believers.  One in five even said they had no doubts about God’s existence. Such statistics are perhaps surprising, given that education today tends to steer us toward more atheistic notions such as the’ Big Bang’ and evolution. Surprising also in the face of the widely touted suggestion that religion is the cause of most conflicts, a suggestion seemingly reinforced by the ferocity of some