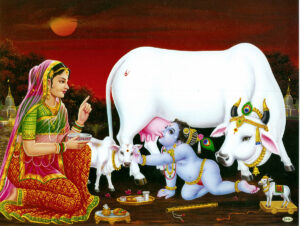 Krishna as a baby with the cows

Every autumn for the last few years I have been subjected to a sad and harrowing experience. Living close to a livestock farm I have had to listen to the plaintive wails of distressed cows separated from their calves. Where the calves were taken does not bear mentioning, and the poor cattle respond by crying piteously day and night, exactly as any human mother would if she were to lose a child.

It must be a strange quirk of modern morality that our society finds no difficulty treating cows in this way. The same can be said for the whole slaughterhouse industry. How do we brook it so lightly? Especially as our society becomes increasingly sensitive to animal cruelty, with charities such as the RSPCA bringing many successful cases to court that have seen some people receive custodial sentences. Recently a man was jailed for hunting badgers with a dog, and another was fined for shooting a seagull. But when it comes to the meat industry it seems that any amount of cruelty is acceptable.

It is fairly common knowledge that animals are individuals like us; they have their own personalities, as any pet owner will testify. The other day I was out for a walk when a huge hound bounded over to me and began to snarl and bark loudly. As I backed away, trying to remember if my life insurance premiums were up to date, the owner thankfully appeared. “Don’t worry about her,” he reassured me, “she just wants to talk.” He told me that she was a “bit cranky in the mornings.” That’s all right then, no problem if she takes a lump out of my leg. But the point of course is that the dog, like every one of us, has personal characteristics. The body is different, but the soul within is the same. In the Bhagavad-gita Krishna tells us that every living being is an equal part of himself, the supreme whole.

Our culture has always personalised animals in so many ways. How can I forget my funny childhood friends, Yogi Bear, Top Cat and Huckleberry Hound? They may have made way for Spongebob Squarepants and Sonic the Hedgehog, but the same idea is there – animals can be just like us. It is not at all uncommon for children to want to become vegetarians as they realise that Larry the Lamb is the joint of meat on their plate. I remember years ago my sister arguing with my mum and dad. “How can we eat animals? Isn’t it cruel?” Don’t be silly, she was told; they are meant to be our food. What else is the point of their existence?

The Vedas tell a different story. Like any human, animals are living beings in this world trying to enjoy. Just our bodies differ, but our basic desires are the same. We all want happiness. Sometimes, due to the nature of our desires, we may be obliged to accept an animal body. In fact the word used in the Vedas for meat is mamsa, which means, “you shall be me (if you eat me).”

All creatures are beloved to God as his parts or progeny, and we should not abuse any of them just because we can. Would any father be pleased if his stronger and more capable sons abused and killed another child who was weak and helpless? Even if that other child was dumb and entirely foolish, would it be right to kill him?

There is a terrible unseen price to be paid when we slaughter helpless creatures. Apart from the fact that we run the risk of taking birth in the animal species ourselves, to receive similar treatment, Vedic wisdom also directly links war and similar catastrophes to animal killing. Srila Prabhupada writes in Srimad Bhagavatam:

“In this age of Kali the propensity for mercy is almost nil. Consequently there is always fighting and wars between men and nations. Men do not understand that because they unrestrictedly kill so many animals, they also must be slaughtered like animals in big wars. This is very much evident in the Western countries. In the West, slaughterhouses are maintained without restriction, and therefore there are big wars in which countless people are slaughtered even more cruelly than the animals. These are reactions brought about by unrestricted animal-killing in the slaughterhouse and by hunters in the forest.”

Perhaps as we wonder how to end so many deadly conflicts all over the world, and as other wars always seem to loom on the horizon, we should ponder our treatment of poor animals. There is so much food we can eat other than meat.

Merry Christmas?
Who should be free to speak?
Krishna Dharma © All rights reserved