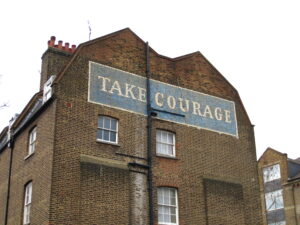 I remember back in the sixties when the words ‘take courage’ were the ubiquitous advertising slogan for a beer of the same name. Quite a nifty publicity idea, I suppose, but a few years ago when it was resurrected in a TV campaign it was banned. The censors quite rightly concluded that encouraging us to drink beer to increase our confidence might not be the best example of social responsibility.

Courage means standing up for what we believe to be right. Intoxication, on the other hand, tends to make us blur the boundary between right and wrong. We need a clear head for that kind of discrimination, as I have discovered over the years when facing my own challenges. For me courage has been more about staying true to myself than standing up to others, in making what I believe to be the right moral choices.

As a young man I became a Krishna monk, renouncing the lifestyle choices of my friends, my family and indeed myself up until that point. It was a radical step. I took vows to give up many of the worldly pleasures I had pursued till then, such as intoxication, illicit sex, meat-eating, and other such things. I donned the orange robes and moved into a temple. Soon after that I actually joined the famous Hare Krishna chanting parade up and down Oxford Street, which took a certain amount of courage, I have to say.
That was well over thirty years ago, and now I am married with children, but I still find myself having to draw upon my inner strength and courage to maintain my principles. For me this is about choosing truth over illusion, the true self or spirit as opposed to the body and its pleasures.

I believe happiness comes when I choose to follow spiritual teachings rather than my own ever-demanding senses and mind. This I find brings an inner fulfilment far more profound than the flickering joys of sensual indulgence. So I shall continue to take courage, although not the Dutch variety, to make the right moral choices. And also to join the Oxford Street crew from time to time as well.