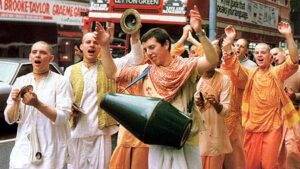 It can be a challenge to maintain your dignity sometimes. I remember when I became a Krishna monk many years ago and donned the orange robes to venture forth on to the streets. Hare Krishna devotees were not a familiar sight at the time, and we would often encounter a spirited response from onlookers, as we sang and danced our way along the road. On one occasion I was showered with a can of beer, and it took strong resolve on my part to keep my composure.

It’s much better these days. I can’t remember the last time I was told to ‘get a job’, and beer showers are certainly a thing of the past, although that might be down to the cost of the stuff today. Those experiences, however, did teach me something about dignity. In the ancient Indian epic, Mahabharata, it is said that one who keeps his dignity and virtue in a time of stress is truly dignified and worthy of respect. I am reminded of the example of a saint in my line named Haridas, who lived in India around 500 years ago, during the time of the Mughals. He converted to Hinduism, thus inciting the fury of the Mughal ruler, who had him severely flogged. Haridas remained calm throughout, constantly praying for his punishers to be forgiven.

I don’t think I’m ready for anything like that, but I think I’m starting to understand where such serenity and nobility comes from. As did Haridas, I believe we are all parts of God, always under his control and care. It was this faith that enabled Haridas to retain his own dignity, even in the face of extreme provocation. He accepted everything as the Lord’s will, meant for his ultimate good. And more than that, he saw all others as equal parts of God, equally loved by him and thus always worthy of respect.

I hope one day to have such a vision. I’ll be ready for the whole beer barrel over my head.