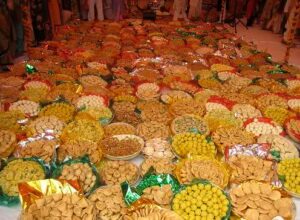 When I first moved into a Krishna temple, back in the 70s, I discovered that the founder of the Hare Krishna society had dubbed his movement ‘the kitchen religion’. I was somewhat bemused by this - but, as a young man in my 20’s with a keen interest in eating, I was not entirely averse to the idea.
And I soon found out the reason for this culinary epithet when, a few weeks later, a festival was celebrated in the temple. To my amazement and delight a colourful array of vegetarian dishes, around 500 or so, were prepared and presented before the temple shrine. I learned that according to the teachings of the Bhagavad Gita, the ancient Sanskrit teaching which I follow, all food should be offered to God before being eaten.

So to the ringing of a bell and chanting of melodious mantras, the food was duly sanctified and then distributed to the eager temple residents, including yours truly. It was incredibly tasty and I managed to reduce myself to a near comatose condition as I attempted to sample as many of the dishes as was physically possible.

Imagine my excitement when I was informed that six similar offerings were made every single day, although of course with far fewer dishes than on festival days. However, one of the elders pointed me to a verse in the Gita which instructs us to eat in moderation if we want to achieve success in our spiritual practise.
It has taken me a while to master that lesson, at least on festival days, but I’m getting there. Seeing myself as a spiritual being, a part of God, I believe real happiness lies in pleasing him, rather than my own senses. Thankfully, the Gita explains that even eating is an act of devotion when one eats sanctified food offered to God. I have to admit, this is definitely a favourite part of my spiritual practise.