How to cheat death

Home / Blog / How to cheat death

How to cheat death 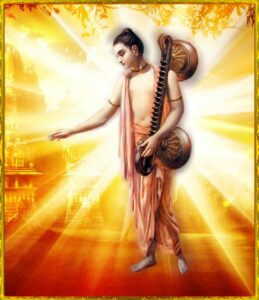 King Ambarish had a very sinful brother who could not be changed. The pious Ambarisha tried repeatedly without success. His brother, Paparaja, would not stop sinning and simply laughed at Ambarish. One day the saint Narada Muni came to see Ambarish and the king asked him to preach to his brother. “Perhaps, O great one, you can turn his mind.”

But when Narada went to see Paparaja he simply hurled insults at him, so Narada decided to leave. As he was going he said, “Please just take this one piece of advice. If you are ever brought before Yamaraja, the Lord of Death, ask him this question: What is the value of a moment’s association with a pure devotee of Krishna?”

Narada then left and in time Paparaja met his death. Sure enough the awful servants of Yamaraja came to take him before their master. Dragging him from his body they chastised him and beat him severely, forcing him to stumble in terror along the long dusty road that led to Yamaraja’s court, where he would be judged.

Seeing him fallen before him Yamaraja said in a thunderous voice, “Your sins are limitless. Long will you languish in the worst of hells, suffering fearful punishments. Do you have any questions?”

Paparaja trembled before the terrible Lord of Death, bowing his head low. Suddenly he remembered Narada’s question and he said, “My Lord, what is the value of a moment’s association with a pure devotee of Krishna?”

Yamaraja, surprised to hear the sinful wretch uttering Krishna’s name, began to think deeply. After some time he said, “I cannot properly determine the answer to this question. Let us go to Lord Brahma and ask him.”

Taking Paparaja, he went before Brahma and asked him the same question he had been asked. Brahma also fell into deep thought and finally said. “I cannot say. This is very difficult to understand. Let us go to Lord Shiva and ask him.”

Then Yamaraja, Brahma and Paparaja went to Shiva and asked him the question. He too could not reply. “Such a question can only be answered by Lord Vishnu himself,” he said, and he, Brahma, Yamaraja and Paparaja all went to Vaikuntha in the spiritual sky where Vishnu dwelt.

Shiva said, “My Lord, please tell us what is the value of a moment’s association with your pure devotee?”

Vishnu smiled and said, “It is this. You are brought to my eternal abode.”

With that Paparaja was liberated and the gods returned in amazement to their respective posts.