Krishna Dharma May 6, 2015 No Comments Broadcasts 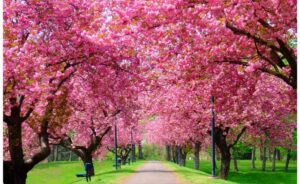 In the spring a young man’s fancy lightly turns to thoughts of love, as Tennyson so delightfully said. Of course nowadays, bombarded as we are with suggestive images on all sides, it might turn the way of love rather more often than just in spring.

Certainly though, spring is the season of reproduction, when nature renews herself and gives forth of her best. In the Bhagavad Gita, Krishna says, ‘Amongst seasons I am flower bearing spring.’ In other words this is the season when we can most easily perceive God, in his creativity, intelligence and beauty.

As a theist, a believer in God, I am sometimes challenged by non-believers with that old chestnut, can you show me God? I am always at a loss to answer this question as to me everything about this world shows me God. I find it to be an astonishing creation which I don’t think we can ever fully comprehend. Year after year, the seasons come and go like clockwork, the sun rises and sets without fail, the planets stay in their orbits, and life in all its magnificent abundance and variety flourishes everywhere, never more obviously than in spring.

I can't see how this could have happened without intelligence. Everything is so perfectly adjusted and synchronized.  Could it really have come about by chance? Actually in the language of the ancient sages of India, Sanskrit, there is no word for chance, as it is a concept they do not acknowledge. The nearest equivalent to the word chance is a word which simply means unknown cause, as the sages believe everything in this world is cause and effect, and the ultimate cause is God.

Sir Isaac Newton once said, “Don’t doubt the Creator, because it is inconceivable that accidents alone could control the universe.’ -- which is a view that makes perfect sense to me. If intelligence is indeed controlling nature in all her intricate complexity then it must be a pretty big intellect.

I have heard it said that we are always seeing God, but we just don’t recognise him. So now that Spring is here I at least will once again be doing my best to make his acquaintance.