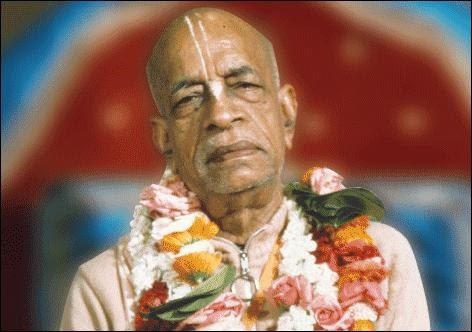 I have been trying to work out if in this life I have been fortunate or unfortunate. Certainly to have come into contact with your movement and to have some small faith in your words is a very great good fortune. I really don’t know how that happened. I was just an average fool heading straight to hell, fully absorbed in sense gratification. Sure I was suffering, but I wasn’t intelligent enough to recognise that fact.  I thought I was looking for spirituality, but didn’t have the faintest idea what that meant.  I had just heard from somewhere that meditation leads you to states of bliss, so I thought well that sounds good, I could use a bit of bliss, let me give it a try.  I starting doing so called transcendental meditation for a while, but all that did was send me soundly to sleep, so I began looking around for something a bit more effective. Roughly around this time I happened to encounter one of your disciples. Not my first encounter. Whilst in London I had previously been sold, on different occasions and on various pretexts, a record, a book and a BTG. I had also watched open mouthed as a Harinam party made its stately way past me on Oxford Street.  But alas I had been too dull and self-absorbed to understand any of it.  Sure, I could recognise that the devotees were on a spiritual path, which I thought was genuine enough, but it looked way too weird to me, the dress, the haircut, the bell ringing – no way was I going to get into any that. So I kept looking. But this time when I met your disciple it was different. A few more years had gone by and Maya had landed some good solid blows right on my chin.

So there I was one day hitchhiking and a van driven by your disciple – – dressed incognito — picked me up. “Where are you going?” he asked. “I don’t know,” I answered honestly. “Do you happen to know of any spiritual communities?” He looked at me curiously and said, “Funnily enough yes. I will take you there.” He then asked if I would read to him the book on his dashboard, which happened to be Bhagavadgita as it is. I picked it up and began to read the verses and it was like bombs going off in my head. I should perhaps add here that due to the assimilation of certain substances I had arrived at a point of total confusion about who I was, where I was, how I got there and where I was going. It was a complete identity crisis. I could intuitively understand that I was something other than the body in which I resided, but what that was I had no clue at all.  I wasn’t even sure if I actually existed at all. Then Krishna spoke to me through you. “For the soul there is neither birth nor death at any time. He has not come into being, does not come into being, and will not come into being. He is unborn, eternal, ever-existing and primeval. He is not slain when the body is slain.”

As I read one powerful verse after another my mind was blown. Actually it might be more accurate to say that it was reconstructed. “What is this knowledge?” I asked. “Where can I find out more?”

To cut a long story short he brought me straight here to the Manor. I really had no intention of joining, especially after I had been apprised of the regulative principles, but I decided to stay for a week or two just to check it out. This was around Janmastami time in 1979 and I distinctly recall the Vyasa Puja ceremony of that year. As I watched one devotee after another stepping up to the microphone and tearfully declaring him or herself to be a low wretch of the worst order, unworthy of your divine mercy, I was astonished.  Here were persons undergoing what to me seemed like a path of very high renunciation and spiritual dedication, and yet they were so humble.  And who was this amazing person they talked about, to whom they had given their lives and for whom they now wept in unrestrained grief at his departure. My heart just melted.  There was no question of going anywhere.  I wanted to be like these people.  Within a week I had shaved up, put on the strange clothes, abandoned my girlfriend, and donated my life savings, the princely sum of £600 – quite a lot back then.

I really don’t know how I received such good fortune, but my misfortune was that I did not meet you Srila Prabhupada. I think about it a lot. I was surely in London at the same time as you on many occasions but the Lord did not guide me to you until after you had left. Still, I feel I owe you everything.  You are certainly the person who saved me, there is no doubt at all in my mind. It doesn’t really matter that I never saw your physical manifestation. Your books, your lectures, your loving disciples, your vibrant mission – I see you in all of these and that is what keeps me alive.

I have just one prayer. Please Srila Prabhupada, although I am hopelessly unqualified, a completely selfish rascal, please by your boundless mercy engage me in your service. And although I can never actually repay my debt to you, I ask that you kindly allow me to die trying.