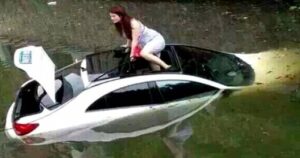 It isn’t always easy to see the funny side of things. Often I find it happens in retrospect. Recently I set off for a trip to that fabled land of chocolate and respected home of the European Union, Belgium. After loading up my trusty Satnav with the appropriate maps, I struck out by road. All went well until I approached my destination and it became apparent that the old satnav was struggling. It had taken me far out into the snow swept wilds of the Ardennes and as I peered about in alarm it suddenly announced, ‘you have reached your destination’. Plainly this was not the case as there was no sign of human habitation anywhere. I was hopelessly lost and indeed bogged down in the snow. I sarcastically rebuked the Satnav lady, who kept insisting that I had arrived, but that didn’t help much. Only after some intense prayer and the fortuitous arrival of a helpful party in a four wheel drive did I eventually escape from my predicament.

Looking back now I can laugh, but at the time it was far from funny. Life is often like that. It’s far easier to laugh after the event, or indeed if the event does not involve you at all. So much comedy works on this principle. I’m sure getting swiped around the head with a carelessly held ladder would be anything but funny, but when it’s Laurel and Hardy I burst out laughing every time.

Krishna scriptures tell us that our very life in this world, no matter how hard it may be now, will one day be laughable to us when we realise it was an illusion that had nothing to do with our true self. The Bhagavad Gita says that all living beings are God’s eternal parts who belong with him, and who are foolishly trying to enjoy this temporary world of pain. When I finally realise this truth and go back to God I am sure I will laugh at my own foolishness. And, I believe, will have actually reached my destination.