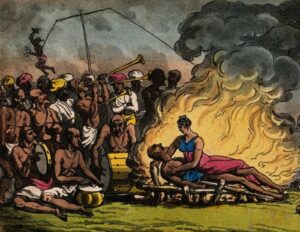 There was once a wicked man of the lower classes. He abandoned all holy rites and gave himself to sin. He had a young wife but also kept a prostitute in his house. The wife, wishing only to please him, served them both. She washed their feet and ate only the remnants of their food. Although the prostitute tried to prevent her she continued to serve that woman in every way, along with her husband. When they lay together in bed the wife would lie nearby on the bare ground. In this way for a long time she constantly served her husband and the courtesan, wading through the ocean of misery.

It came to pass that the husband, due to eating bad food, contracted a disease that caused weeping sores all over his body. He was extremely distressed day and night. The prostitute, taking everything of value from the house, left one night and went to another man. The husband became ashamed. He said to his wife, ‘Great has been my sin. I have acted cruelly and sported with a prostitute even in front of you. What will be my fate now? The Vedas say that a man who neglects a chaste and faithful wife will suffer terribly through the course of fifteen lifetimes.’
The man was consumed by remorse and he begged his wife’s forgiveness, praising her fortitude and chastity. The wife said, ‘Do not say so. My suffering has come about simply due to my own past acts. I do not blame you or anyone else. This has been the fruit of my own sins.’

In this and other ways she consoled her husband. She brought money from her father and other relatives and continued to nurse him. She assiduously cleaned his body, washing away the pus with turmeric water and cleansing his anus and private parts, which had become cancerous. She fanned him with peacock feathers and slept little during the day or night. Distressed by his misery she felt as if the world was ablaze on all sides.

That faultless lady prayed, ‘May the gods and forefathers hear me, may Goddess Earth favour me, please release my husband from his pain. I shall make all offerings to you. I shall fast and place my body on the points of sharp thorns. I shall give up cooked food and sweets, enduring any and all difficulty. Let my husband live for a hundred years free from ailment.’

But her husband’s illness deteriorated. She still served him menially, feeding him by her own hand. One day his life airs suddenly passed off and his jaws clamped shut as she fed him, biting off her finger. Not minding this, but seeing that he had died, the lady grieved for some time. She then sold off her jewellery and bought a heap of fuel. Building a great funeral pyre she poured oil all over it and placed her husband’s body on it. She then climbed onto the pyre and joined with her husband, placing her face next to his, her heart by his heart and her arms around him. Dragging a flame to the pyre with her foot she set it alight. As the fire blazed up she cast off her body and rose to the heavens, taking her husband with her.

(This story is from 'Two Vedic Tales' by Krishna Dharma.)