Krishna Dharma May 29, 2015 No Comments Articles 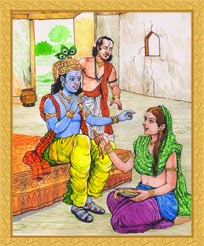 When my children were small they pooled their resources one year to purchase for my birthday a fine looking tie pin in the shape of a golf bag and clubs. Actually I’ve never played golf in my life, and as far as ties go, since my schooldays when they were obligatory, I have made a point of avoiding them. Anyway, although the tiepin was of little use to me I was thrilled to receive it, as it was given with love. I still have it safely stored in my very small jewelry box, where it takes pride of place.

Even an insignificant gift given with love is surely greater than anything given without love. In the Krishna faith, which I follow, Krishna is of course God. He tells us that the only gift he wants is our love. There is a story about how, when he appeared 5000 years ago, he went on a diplomatic visit to see a great king. This particular monarch had no affection for Krishna or his followers, but nevertheless in an attempt to win Krishna’s favour he offered him the hospitality of a vast and beautiful palace filled with all kinds of luxuries. Knowing of the king’s antipathy toward him, Krishna refused the offer and went instead to the small cottage of one his devotees.

When he arrived he was received by the lady of the house who offered him a little fruit as refreshment. Overwhelmed with affection to see her beloved Lord, she carefully peeled him a banana; but, unable to take her eyes away from Krishna’s face, she absent-mindedly threw the banana in the bin and gave him the peel. Krishna in turn was looking affectionately at her and he simply accepted the peel and began to eat it without any sign of distaste.

As with me and my never used tiepin, Krishna accepted the love rather than the thing that was being offered. Love then is surely the greatest gift we can give or receive. And as the song goes, it’s the only thing that there’s just too little of.

How to cheat death
Courage (Pause for Thought. BBC Radio 2. May 28)
Krishna Dharma © All rights reserved