The Lord’s Feminine Side.

Home / Blog / The Lord’s Feminine Side.

The Lord’s Feminine Side. 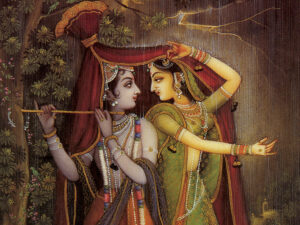 “A woman’s place is in the home,” so the old saying goes. Not any more. These days it is not uncommon to find women heading the boards of huge corporations or even leading countries. Equality is sought everywhere, whether it be the workplace or the home, and the roles of men and women are fast becoming interchangeable. Patriarchal attitudes of past ages are no longer acceptable or ‘politically correct’, and we endeavour to root them out wherever they may be found.

But there is one area where the move toward female emancipation seems to have had little effect — the concept of God. He is always a ‘he’, our ‘Father in heaven’, usually depicted as an old man with a beard sitting up in the clouds somewhere, all alone, without even a female companion. Except, that is, in Vedic culture. Followers of the Vedas have always accepted that God has both a male and female aspect.

Both features are said to be eternally manifest. The Vedas always describe the Supreme with a feminine counterpart or consort, the divine Goddess. She is understood to be the Lord’s energy, the means by which he is known. She embodies all divine qualities, through her all things are made manifest, and from her come all living beings.

There are many names of the Goddess found in the Vedic writings, such as Lakshmi, Sita, Maya, and Kali. Ultimately all her forms expand from one, the supreme original Goddess who is known as Radha. At the Manor we worship Radha with Krishna, and last month we celebrated her holy appearance day in the festival of Radhastami.

For Vaishnavas, Radha is the most important personality of all. She is the eternal consort and lover of Krishna, the Supreme Lord. She is considered completely ‘non-different’ from God, but at the same time she has her own special identity. In the Vedas there is a verse that says, “Radha and Krishna are one and the same person, but they have separated themselves eternally.”

Another Vedic verse states, “The one becomes many to expand the ocean of bliss.” God is said to be “pleasure seeking”, which is evidenced by us, who as parts of God exhibit the same characteristic. His desire for enjoyment is seen first in the form of Radha, who is described as the Lord’s “pleasure potency”. She gives the highest pleasure to the Lord and from her come innumerable varieties of spiritual beings, who enjoy with God in unlimited rasas, or spiritual tastes. “Variety is the mother of enjoyment,” it is said, and the Vedas say that this is true even in the highest dimension of spiritual existence, between God and his eternal lovers, which includes us all.

Through the Goddess we are expanded from the Supreme for the purpose of blissful love. And through the grace of the Goddess we are able to awaken and fully experience that love. In order to help bring this about she assumes many forms. She comprises the totality of material existence, which is meant to direct us toward the Supreme. Vedic wisdom holds that we in the material world are forgetful of our original position as God’s eternal lovers; that we have somehow fallen from that state. The Goddess therefore works to gradually bring us back to our spiritual consciousness. As the embodiment of love, mercy and compassion, she leads us away from all misery and back to our constitutional position in which we experience unlimited happiness.

It is said that God is all-attractive, indeed this is the meaning of the Sanskrit name ‘Krishna’. However, Radha is said to be even more attractive in that she attracts even him. Another name of God is ‘Madan Mohan’, which means ‘one who bewilders the mind of everyone with his charms.” But the Goddess is called ‘Madan Mohan Mohini’ because she bewilders even his mind.

Vaishnavas therefore always worship God along with his divine consort. Radhastami was celebrated with great joy at the Manor, as the devotees meditated on their eternal loving relationship, the perfection of pure spiritual love.

Love is not love.
Why are there different religions?
Krishna Dharma © All rights reserved