Why are there different religions? Posted in: Blog 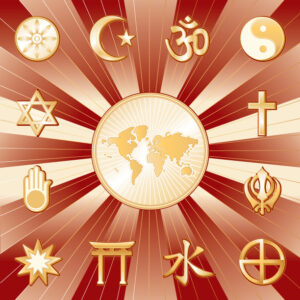 One God, many paths

The other day I popped into a local grocer to pick up a few things. The assistant, seeing me in robes, immediately said, “Your book is wrong.”

Interesting greeting, I thought, but I merely smiled. Over the years I have become used to people reacting to my unusual appearance in all kinds of ways. Once a group of children in a small northern town asked me if I was from another planet.

Of course, I laughed at that one, but the assertions that my faith is in some way wrong, as with my friendly shop assistant, are not always so funny. Obviously these kinds of perceptions, seeing other religions as mistaken or inferior in some way to one’s own, lie at the heart of so many disputes. History bears witness to many religious conflicts, and even today there are many preachers of all persuasions seeking to convert others.

Why do such differences exist? Why are there so many different religions apparently competing with one another? Surely they can’t all be right. But how can they be reconciled when they often have exclusivism enshrined as a fundamental tenet, with various faiths declaring their particular path to be the only true way?

Well, here’s the way the Vedas explain it. In every religious teaching there are two components, eternal truth and time-specific instructions meant for the particular group being addressed by the teacher. The former never changes, but the latter obviously will. We therefore need to be able to discriminate between the two, but it seems that many times we take time-specific instructions out of context and try to apply them as eternal truths.

For example, even if a religious teacher says he is the only way, if we understand the eternal truth that God can only be reached through his representative, (mediator, guru, prophet or whatever you want to call such a person), then we can see the truth of such a statement. Vedic teachings make it clear that we require the guidance of a divinely inspired teacher. God cannot be approached directly.

In every theistic doctrine the same essential truths are given – this life is not the all-in-all, we are the eternal servants of God, prepare for your eternal life, don’t build your house on sand, follow God’s laws, etc. Religion should bring us closer to God, evoke our love for him and increase our knowledge of him and his divine attributes. This is the test of genuine religion. Bona-fide teachers in different places and at different times are all leading their followers toward this goal, but they may have to use different methods according to the condition of their audience. As the old saying goes, “Different strokes for different folks.”

This catholic and tolerant approach has always been the understanding in Vedic culture and Hinduism. Srila Prabhupada would often say that one can chant the names of God as given in any faith and make spiritual progress. “God is one,” he would say, “and therefore religion is also one, to know and love him.” He was always at pains to point out that he was not trying to convert anyone to Hinduism or any other specific religion. His message was that he was simply teaching the pure science of loving God, as found in all genuine faiths.

I am therefore always happy when I see someone declaring their strong faith, no matter what their persuasion. I just wish that it did not have to sometimes be accompanied by a negation of my own faith.